Kindly be patient until we check room availability ...

Redirecting to cart, Please be patient... 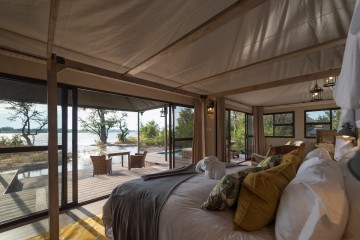 Home away from Home

Locally known as ‘Mosi-oa-Tunya’, translating to the ‘The Smoke That Thunders’, Victoria Falls are deservedly one of the Seven Natural Wonders of the World. Forming a natural border between Zambia and Zimbabwe, fed by the mighty Zambezi River, the Falls are a sight to behold!

The 100m vertical chasm spanning the full one and a half kilometre width of the river, creates the biggest curtain of falling water in the world and one of the most extraordinary displays of nature’s might and magnificence. Despite the beauty of the Falls themselves, this region warrants the reputation as an adventure centre, offering a plethora of adrenaline-inducing activities both in and around the Falls. The best time for viewing the Falls is from July to October when the water levels are high but the mist has subsided, offering clearer views.

The indigenous languages are Ndebele and Shona but English is the official language and is widely spoken and understood.

One arrival in Victoria Falls you will be greeted by some of the friendliest people in the world. The predominant religion is Christianity, with traditional beliefs in rural areas, and some Hindu, Muslim and Jewish minorities.

Victoria Falls is situated in a summer rainfall region. Instead of differentiating the climate according to the conventional spring/summer/autumn/winter divide, locals consider there to be two distinct climates - the dry season and the wet season. The dry season begins in May and extends through autumn and winter into October. The early part of the dry season is a temperate time with daytime temperatures in the early 20°C range and the mercury often falling to single digit figures at night.

Generally, the rains begin during the course of November and, by December, the wet season has usually set in with hot daytime temperatures, lightened by torrential downpours that generally take place during the late afternoon. At night, temperatures are an average 18°C and, during the day, the temperature can rise into the 30’s. Visiting the Victoria Falls during the wet and dry seasons is a markedly different experience. In early summer, the water level in the Zambezi is at its lowest, and the spray from the Falls is least dense, allowing for more visibility and better photographic conditions. Low water levels mean that parts of the Falls dry up, particularly on the Zambian side, but this is when Devil’s Pool is accessible. During late summer, when the Zambezi is pumping, the spray from the Falls is intense and any visitor to the rainforest can expect to be soaked.

May to November are the best months for most visitors but…

The Zimbabwean dollar is no longer a valid currency and almost all transactions are conducted in US Dollars. The currencies presently used in Zimbabwe include US Dollars and South African Rand. Make sure you have a sufficient amount of foreign currency in your possession, prior to entering the country due to a cash shortage and the fact that many ATMs will not accept international cards. Do not change foreign exchange with moneychangers on the street, as this is illegal. It is best to travel with small denominations of foreign currency.

As Victoria Falls is situated in a malaria zone, it is recommended that you consult your physician on the correct preventative medication required before you travel.

Bring small denominations for tipping purposes as small change is very rarely available locally. Whilst not compulsory, it is enormously appreciated and often contributes a substantial amount toward ensuring that those working in the service industry earn a living wage. Just make sure that a service charge hasn’t already been added to your bill.

WHAT TO DO IN VIC FALLS

Victoria Falls will not disappoint; whether you’re seeing the Falls for the first time or planning a hair-raising bungee jump, there is so much to do and see! Your visit will be jam packed with adventure so plan wisely. These are our top recommendations:

Upstream of the iconic Victoria Falls in the Zambezi National Park lies a pristine piece of land on the banks of the Zambezi River. Nestled within this wild paradise is the Old Drift Lodge, a place frequented by elephant, buffalo, zebra, giraffe, lion and many other animals. The lodge is suitable for families and offers spacious tented suites with an array of activities to experience Victoria Falls at its best.

10 Twin/Double Tented Suites
A spacious bedroom with en-suite bathroom equipped with indoor and outdoor shower, an outdoor bath with a view plus private plunge pool.

4 Family Suites
Consists of two inter leading en-suite tented suites consisting of 1 double and 1 twin. Each suite is equipped with a spacious bedroom with en-suite bathroom equipped with indoor and outdoor shower, an outdoor bath with a view plus private plunge pool.

DINING
Main restaurant and bar area under canvas with sweeping views of the Zambezi River.

PLEASE NOTE
As Old Drift is unfenced and located in the Zambezi National Park, it is not recommended that children younger than 16 years occupy a room on their own (without an older sibling/adult present).

Write Your Own Review

Use spaces to separate tags. Use single quotes (') for phrases.

You have no items to compare.

You have no items in your shopping cart.